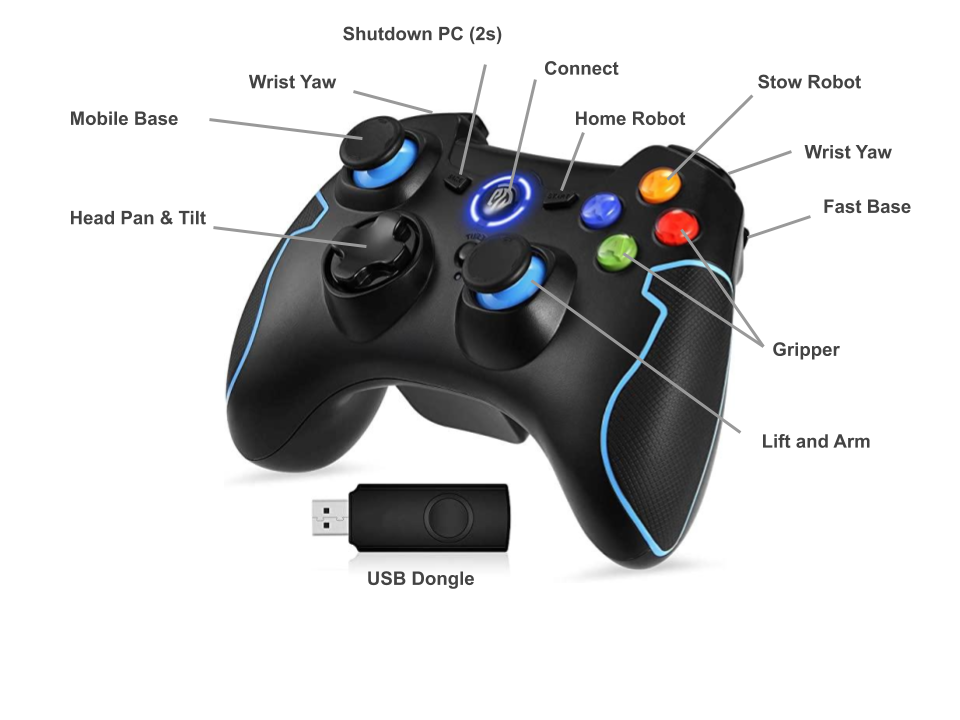 Stretch comes ready to run out of the box. The Xbox Teleoperation demo will let you quickly test out the robot capabilities by teleoperating it with an Xbox Controller.

Note: Make sure the USB Dongle is plugged into the the USB port of the base trunk.

To start the demo:

You're ready to go! A few things to try:

If you're done, hold down the Shutdown PC button for 2 seconds. This will cause the PC to turn off. You can then power down the robot.

Begin by running the following command in your terminal:

To teleoperate a Stretch's mobile base with the keyboard, you first need to switch the mode to nagivation for the robot to receive Twist messages. This is done using a rosservice call in a new terminal. In the same terminal run the teleop_twist_keyboard node with the argument remapping the cmd_vel topic name to stretch/cmd_vel.

Below are the keyboard commands that allow a user to move Stretch's base.

Create a node for Mobile Base Teleoperating

To move Stretch's mobile base using a python script, please look at example 1 for reference.

For full body teleoperation with the keyboard, you first need to run the stretch_driver.launch in a terminal.

Then in a new terminal, type the following command

Below are the keyboard commands that allow a user to control all of Stretch's joints.

For keyboard teleoperation of the Stretch's mobile base, first startup Stretch in simulation. Then run the following command in a new terminal.

In a new terminal, type the following

The same keyboard commands will be presented to a user to move the robot.

An alternative for robot base teleoperation is to use an Xbox controller. Stop the keyboard teleoperation node by typing Ctrl + c in the terminal where the command was executed. Then connect the Xbox controller device to your local machine and run the following command.

Note that the teleop_twist_joy package has a deadman switch by default which disables the drive commands to be published unless pressed. For a Logitech F310 joystick, this button is A.